As you approach Polemi from the B7, you pass the Kamanterena Winery on your right. Just beyond that, if you are paying attention, you will see a lookout tower that wouldn't look out of place on a WW2 movie. A couple of ancient armoured vehicles might also perk your interest, so pull over, and take a look at Polemi Concentration Camp. 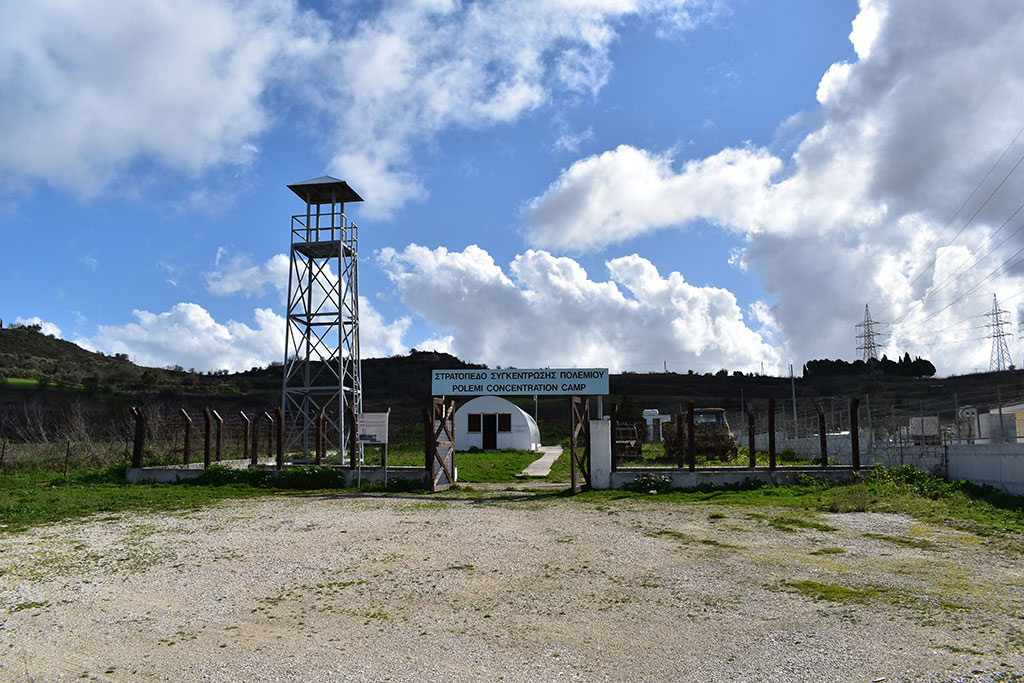 You can park in front of the camp. There is no need to park on the road. 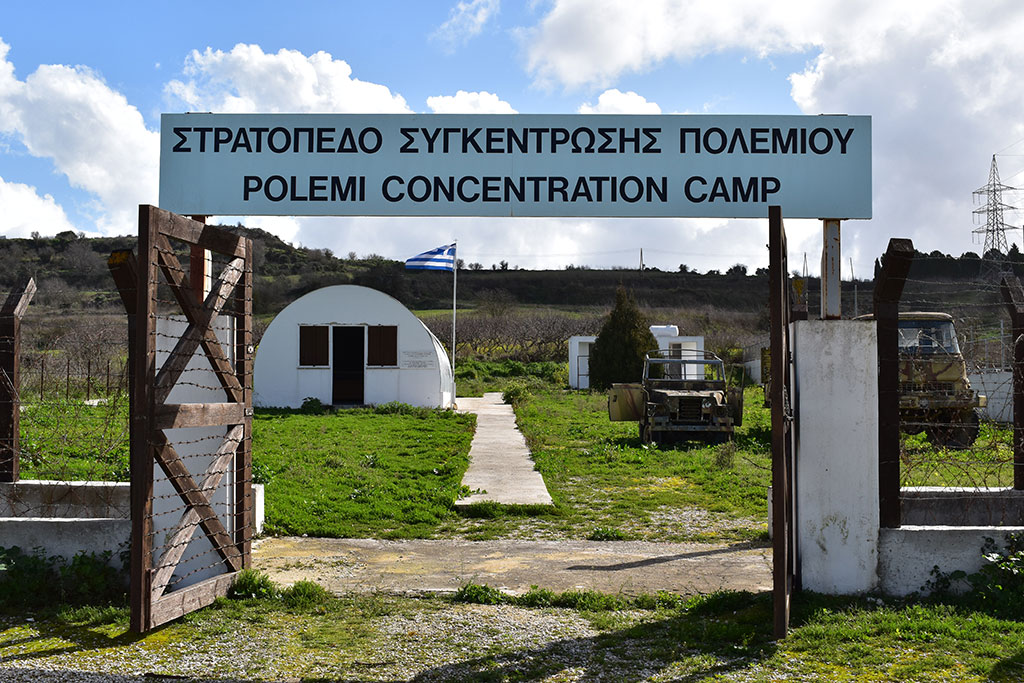 Ok, so let's deal with the elephant in the room. Why is there a concentration camp in Polemi? Well, the truth of the matter is that Concentration Camps weren't invented by the Germans in WW2. The UK had concentration camps during the Boer War, for the internment of prisoners, and they had them in Cyprus from 1946 - 1949, to regulate the flow of Jews into Palestine. More information is available on Wikipedia. However, the Polemi Concentration Camp was built a decade later, to house and interrogate EOKA prisoners during Cyprus' fight for independence from the UK. 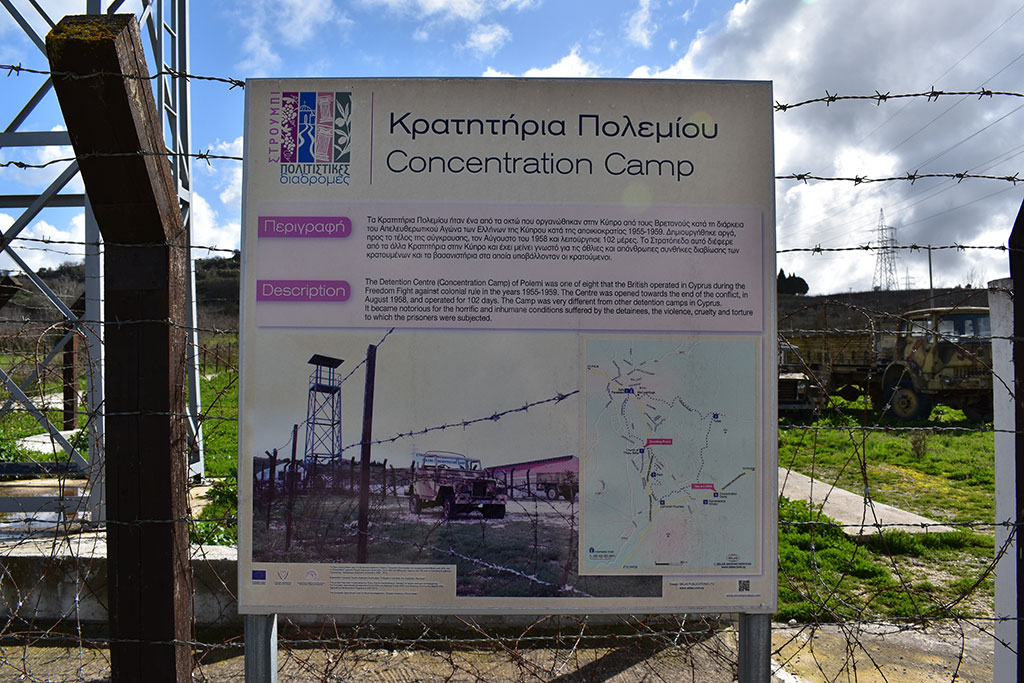 The sign has more information, and reads as follows:

The Detention Centre (Concentration Camp) of Polemi was one of eight that the British operated in Cyprus during the Freedom Fight against colonial rule in the years 1955-1959. The Centre was opened towards the end of the conflict, in August 1958, and operated for 102 days. The Camp was very different from the other detention camps in Cyprus. It became notorious for the horrific and inhumane conditions suffered by the detainees, the violence, cruelty and torture to which the prisoners were subjected. 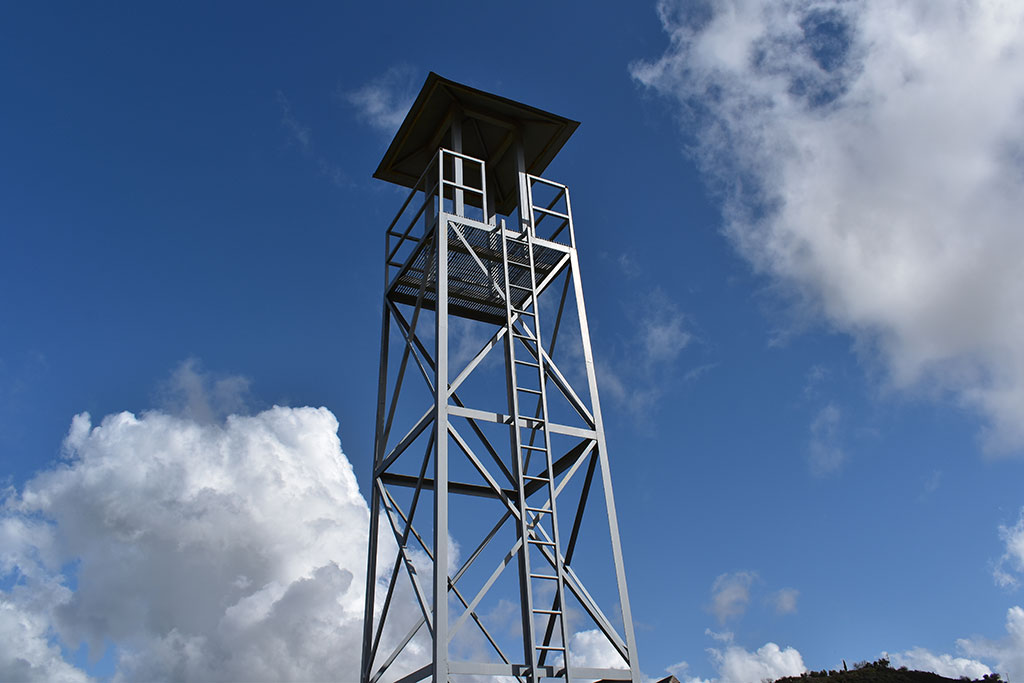 Let's have a look at that tower. It reminds me of countless war films. 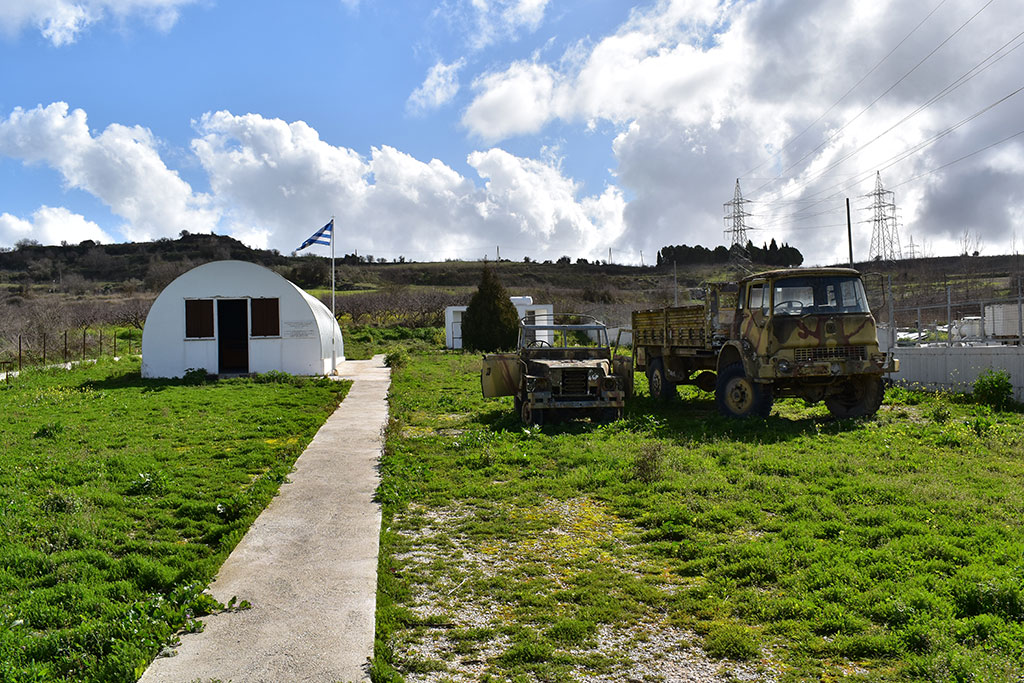 These days, the gates to the camp are unlocked. Last year they were bolted shut though, so presumably they were doing some repair work? 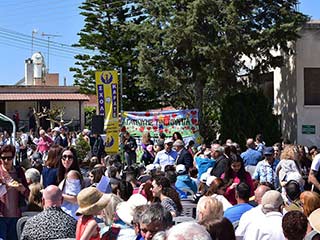 This morning, Polemi was bathed in Spring sunshine, as it invited people to come and see the tulips that flourish there every year. It is an annual event, which gives a true taste of traditional Cypriot life. And as we live in Polemi ourselves, it would be rude not to cover it, wouldn't it? 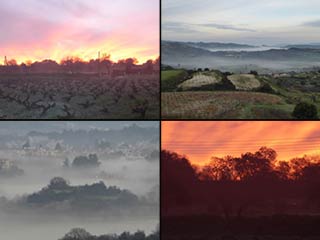 A couple of days ago I was up bright and early running some errands, and I couldn't help but notice the beautiful sunrise. Naturally enough, I took some pictures, and this put me in the mood to take some more snaps as I carried out my chores... 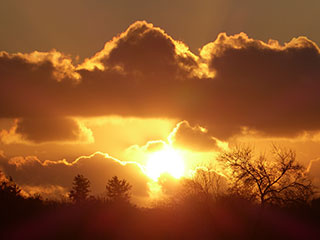 Polemi isn't known for it's sunsets, well, to us at least. They are normally the domain of the coastal areas of Paphos, and Max's house. However, this evening, the Gods smiled on us, and granted us a lovely sunset. The photos can provide a brief, fitting epilogue to our last blog, Polemi Sunrise. 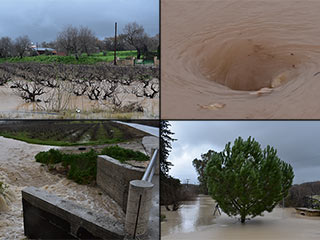 The winter storms are back with a vengeance. Polemi had 46mm of rain overnight, and it showed this morning. Our webcam presented a sorry picture, but I was curious to see what was happening in other parts of the village...

Routes To The Blue Lagoon

The coastal route to the Blue Lagoon has come under some scrutiny over recent years, owing to several accidents. Is it really that dangerous, and is the land-based route any safer? Follow us as we take both of them, and decide for yourself.

Cameras operational as of today; details on locations and fines

Today sees the launching of the traffic cameras surveillance system on a pilot basis.

Speaking to philenews, Charis Evripidou, assistant director of Traffic Police Department, said that four firm cameras have been installed at Griva Digeni Street and Severi Avenue, while there are four mobile ones, which are placed all over Cyprus according to a schedule.

Cemeteries fill up, but still no cremations

It’s been five years since cremation was made legal in Cyprus after a long battle with the Orthodox church, but there is still no private or state-run crematorium.

However, this could change by 2023, provided that no further rezoning, town planning restrictions, or bureaucracy causes delay.

Cyta says continues to include UK in EU roaming circle

Cyta on Friday announced that it continues to include the UK in its list of countries for which the EU regulation on roaming applies.

The telecommunications company said it therefore urges its customers travelling to the UK to keep the ‘automatically select network’ feature on their mobile phones activated.