Cyprus has more than it's fair share of abandoned villages. The troubles caused the displacement of both Greek Cypriots and Turkish Cypriots.The environment itself has caused other villages to be abandoned for reasons of safety. Whatever the reason, the abandonment caused emotional pain and suffering to the affected people. So is it right to right a series of blog articles on them? I thought about this for a while, but decided that yes it was. Cyprus is a land built on antiquities, and these villages are just the latest example. I had no problem blogging about a Necropolis after all.

However, some of these villages, and especially Vretsia, do still get visits from the displaced families. So if you do decide to visit these places on the strength of these articles, please bear that in mind, and treat them with respect. Remember the urban exploring motto: "take only pictures, leave only footprints...". 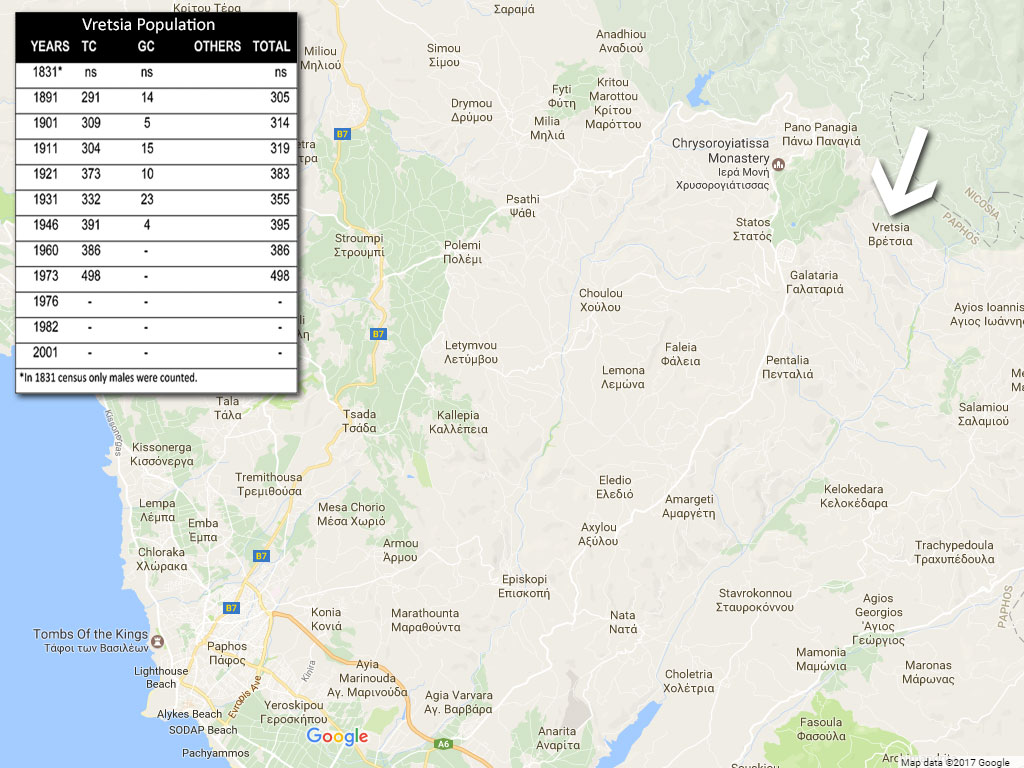 Vretsia is best approached from the Statos road. If you are in a 4x4, you can also come from the direction of Pera Vesa. Hard core 4x4 drivers can also try the approach from Salamiou, though by all accounts that can get very treacherous. 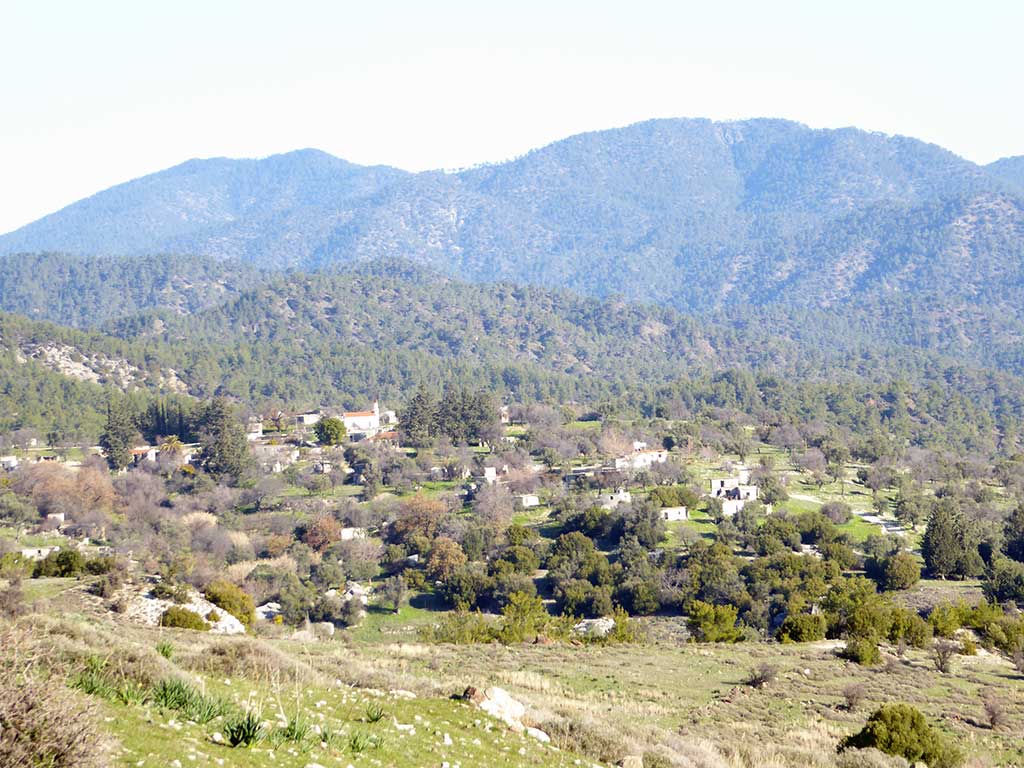 From a distance, Vretsia looks an idyllic Cypriot village, nestled in the foothills of Paphos Forest. 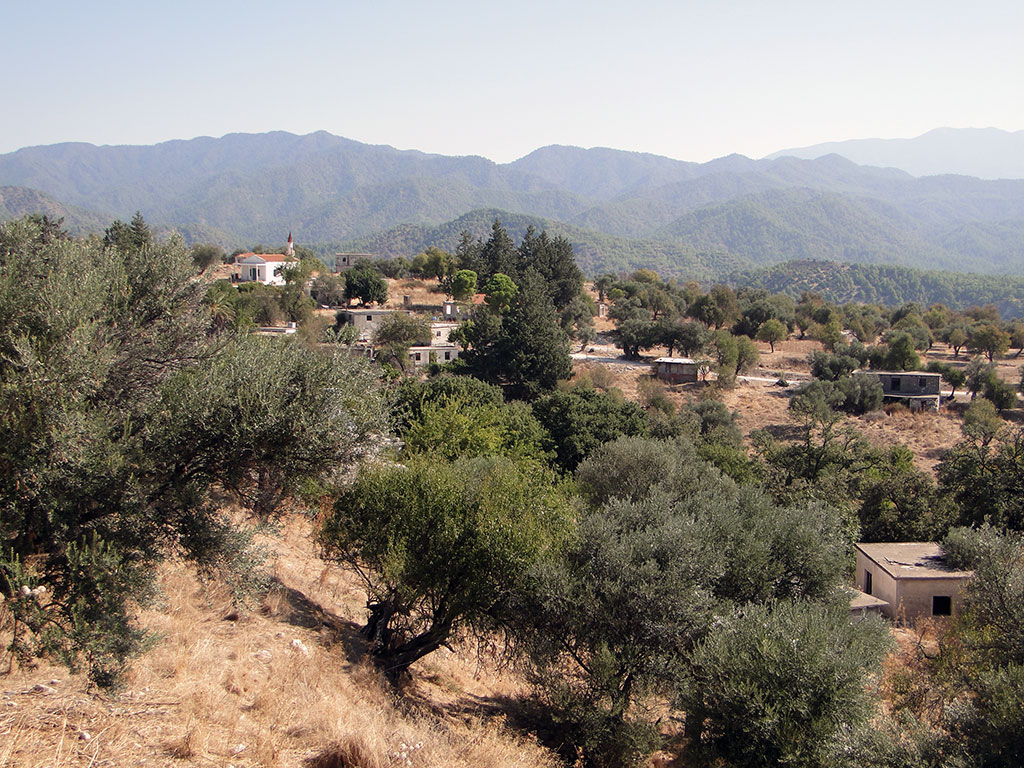 Even this closer view, taking by Max, a forum regular, seems to depict a pleasant scene. 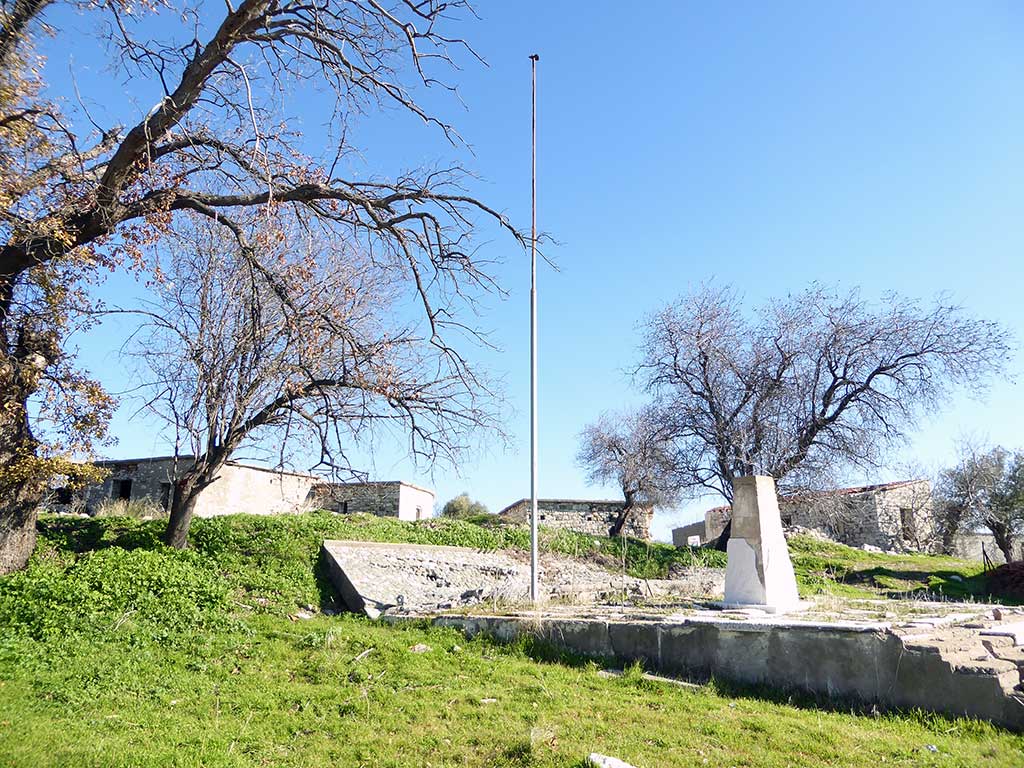 However, by the time you reach this flagpole, which was presumably in the old village square, you can see that the place is abandoned. 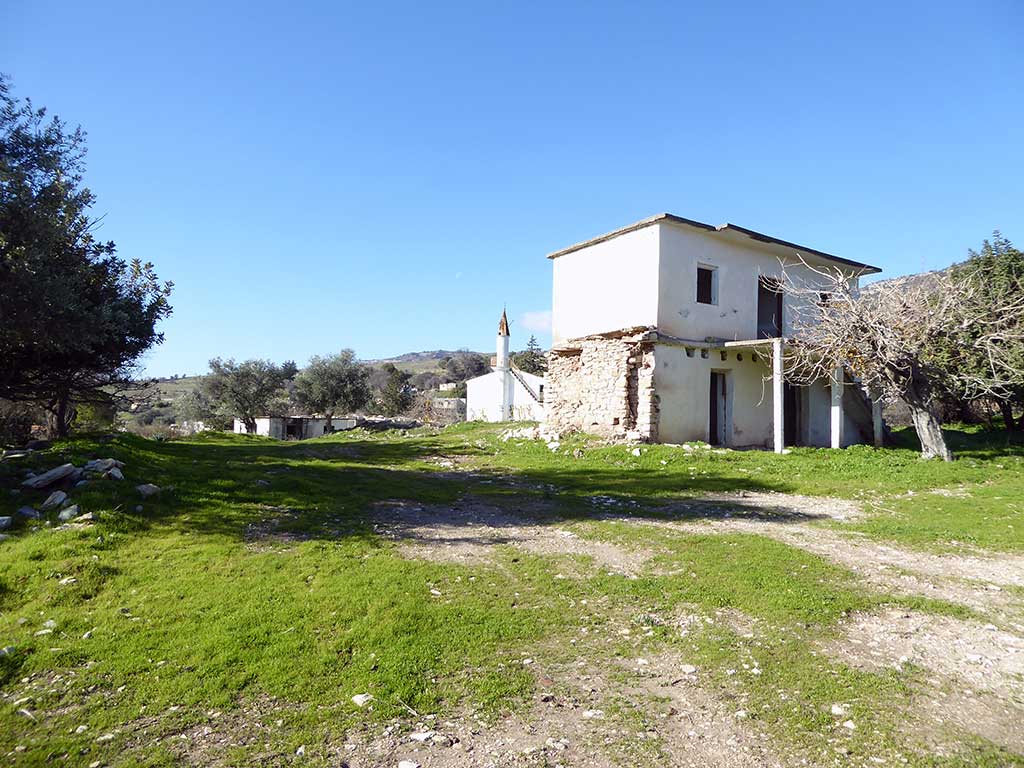 The mosque explains why the village was abandoned. The following excerpt was taken from the PRIO Website on Internal Displacement:

As may be seen from the chart above [see table shown on map above], the village was predominantly inhabited by Turkish Cypriots from the 19th century. Throughout the 20th century, the population of the village fluctuated and eventually increased slightly, from 305 in 1891 to 386 in 1960.

No one was displaced from Vrecha during either the emergency years of the 1950s or the intercommunal fighting of 1963-64. However, during the latter period Vrecha received many displaced Turkish Cypriots from the nearby village of Galataria/Yoğurtçular(305). Richard Patrick recorded 33 displaced Turkish Cypriots still living in the village in 1971. He also put the total population of the village at 456 in that year.

During the war of 1974, the Turkish Cypriot Fighters of Vrecha refused to surrender their guns to Greek Cypriot forces who were trying to disarm the Turkish villages. After a ceasefire was declared in late August of that year, many villagers took their weapons and fled over the mountains to the north, then under Turkish control. During this period, the village also became a transit area for Turkish Cypriots who were trying to get to the Turkish-controlled north through the mountains. The 160 persons who remained in Vrecha were eventually evacuated to the north under UNFICYP escort on 1 September 1975. They were resettled in many different villages such as Lapithos/Lapta(237), Neo Chorio/Minareliköy(073), Zodeia/Bostancı(047), and Katokopia/Zümrütköy(048), as well as in the towns of Famagusta(140), Nicosia(074), Kyrenia(236) and Morphou/Güzelyurt(072). The number of Vretcha/Dağaşan Turkish Cypriots who were displaced after 1974 was around 500 (498 in the 1973 census). 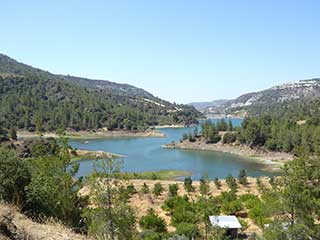 This is another Road-Trip blog. Paphos Forest contains many treasures, and two of it's finest are the Venetian Bridges Roudia and Kelefos. Of the two, the latter is easy to locate. However, Roudia eluded us for some time, as it is easy to miss, being buried in woodland. So we have put together this guide, showing the route we took from our starting point of the abandoned village of Vretsia, through the forest to Kelefos and beyond. The aim of this blog is not to provide a de-facto route through the forest. After all, tracks get closed, and new tracks get opened every year. No, we mainly want to show you what you can expect to find should you decide to venture into the forest. We will do other blogs on the bridges themselves; today is all about the journey... 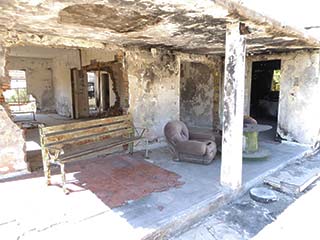 A few months ago, I wrote a blog about the abandoned village of Vretsia. I also did a supplementary blog about Vretsia Taven which, until last summer had still been open seasonally, for hunters and the like. In that blog, I reported that it had obviously had a nasty fire, as it was very badly burned. Well yesterday we were giving some guests a tour of the area, and we popped in to see the tavern. I was pleasantly surprised with what I found... 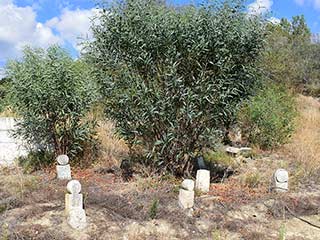 If you drive along the B7 towards Polis, pay attention as you pass by Chrysochou. On your right, through the trees, you will be able to make out some strange stone shapes. One day recently, while we were preparing for our recent Chrysochou blog, we decided to investigate further... 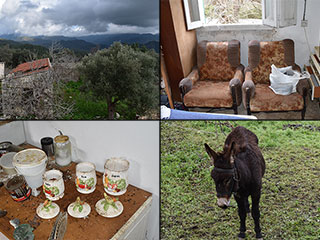 Vretsia has always been a favourite place of ours to explore in Cyprus. Nestled on the edge of Paphos Forest, it has been the gateway to many an offroad adventure. We first blogged about it a couple of years ago, but recent changes have made us return to take a closer look... 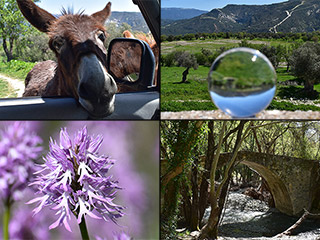 Playing With The Vretsia Donkeys

We meet any number of animals when we are out on our travels. On the last bank holiday, we thought we would pay some of them another visit, so we packed a picnic and headed off to Vretsia, to say hello to the donkeys... 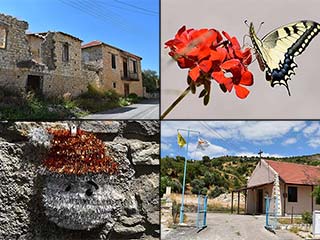 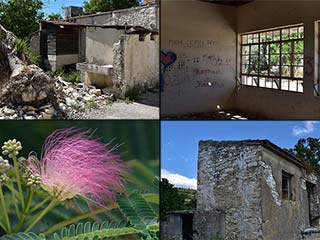 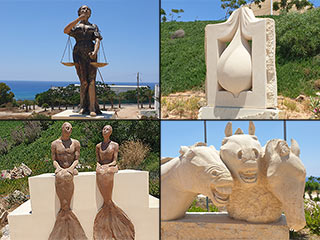 Step beyond the beaches and noisy bars of Ayia Napa, and a wealth of more cerebral entertainment awaits. Top of the list must surely be the sculpture park. Our annual trip to the East wouldn't be complete without a visit, so here is a look at some of the latest attractions to appear in Cyprus' best sculpture park. 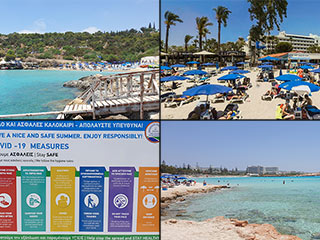 Ayia Napa is Gearing Up!

Last week we went on our annual pilgrimage to Protaras, Paralimni and Ayia Napa. What would we find when we got there? Would anything be open, would the beaches be crowded? Is it worth visiting? Read on and find out. In our first blog we will concentrate on the seaside. 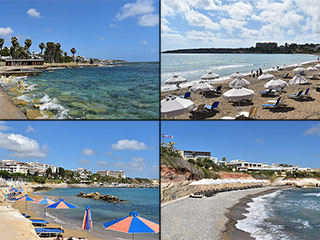 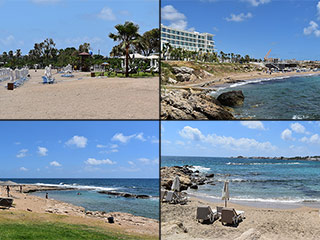 The worst was averted this morning in the Paphos-Polis road, near the Tsada community, when a moving car caught fire and was gutted by flames in just a few minutes.

The Department of Meteorology issued on Friday another yellow alert for extremely high temperatures on Saturday.

The alert is in force from 11 am until 4 pm on Saturday with the inland maximum temperature expected to be around 42 C, 33 C in the mountains, 32 C on the west coast and 34 C on the other coasts.

UK in Category B from August 1

Move to ban boats, fishing in parts of Akamas

The Agriculture Ministry is proposing to prohibit fishing and boats in some of the most popular areas of the Akamas for part of the year under a draft decree which has been sent to stakeholders for feedback by July 10, Phileleftheros reports.