A new piece of Street Art has been created in Geroskipou, and it is magnificent! Let us introduce you to "Surround" which adorns a water tower in Andreas Sylianides park. New parks are a big thing in the district of Paphos at the moment. They are popping up all over the place. This particular park, in Geroskipou, is especially blessed in that it has a new mural painted by Italian Artist Millo. If this artwork looks a bit familiar, it is because Millo created an amazing mural in Old Town Paphos a few years ago. Unfortunately, the owners of that building wanted to renovate it, and the mural was painted over in the process. The less said about that the better. Fortunately the good people of Geroskipou stepped in, and offered Millo a new canvas.

So What's It All About? Looking at the tower, there is a definite theme of water. This is fitting, as it is painted on a water tower. However, rather than spend hours contemplating the design, I shall cheat and look on Millo's Facebook Page.

Here's my last mural, a water tower in Geroskipou, Cyprus.

Surrounded by the water as the island that hosts it, there's a female figure that looks ahead, while all the lives passes through her hands.

A gentle tribute to the figure of the goddess Aphrodite (as here according to the greek mythology, it's where her sacred gardens were located) with the will to underline the role and the importance of water, the real main character, not only in the mural, but in all Cyprus, located in a such unique position in the Mediterranean sea, but that still fights the most dramatics water shortages of Europe.

A special thanks goes to the city of Geroskipou and its late major, prematurely passed away, for the invitation to paint such a challenging space and to the great work done to make it possible, as a curator, to @yiannissakellis . It's nice to be able to get such a verbose description from a street artist!

How To Get There

This film shows you how to get to the tower. It starts at the McDonalds Takeaway near the motorway roundabout, and goes via the new bypass. It is a 360 film, so you can move the camera around as it plays. 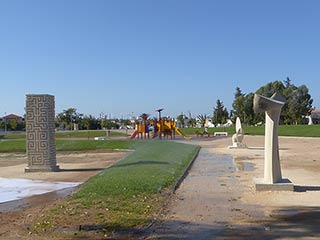 As part of Pafo2017, a new Sculpture Park was commissioned in Geroskipou. Inspired by local history, legends and traditions, ten Cypriot and foreign sculptors have created on-site works drawing on the history of the area and, in this way, leaving behind them the traces of the European Capital of Culture. That's what the blurb says anyway. So what are they like? 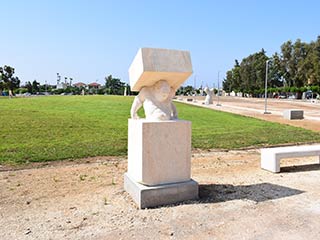 Last year we blogged about the Pafos2017 Sculpture Park that had been erected in Geroskipou. Well, a little bird told us that more work was afoot, so we took the camera to have a look...

A new piece of Street Art has been created in Geroskipou, and it is magnificent! Let us introduce you to "Surround" which adorns a water tower in Andreas Sylianides park.