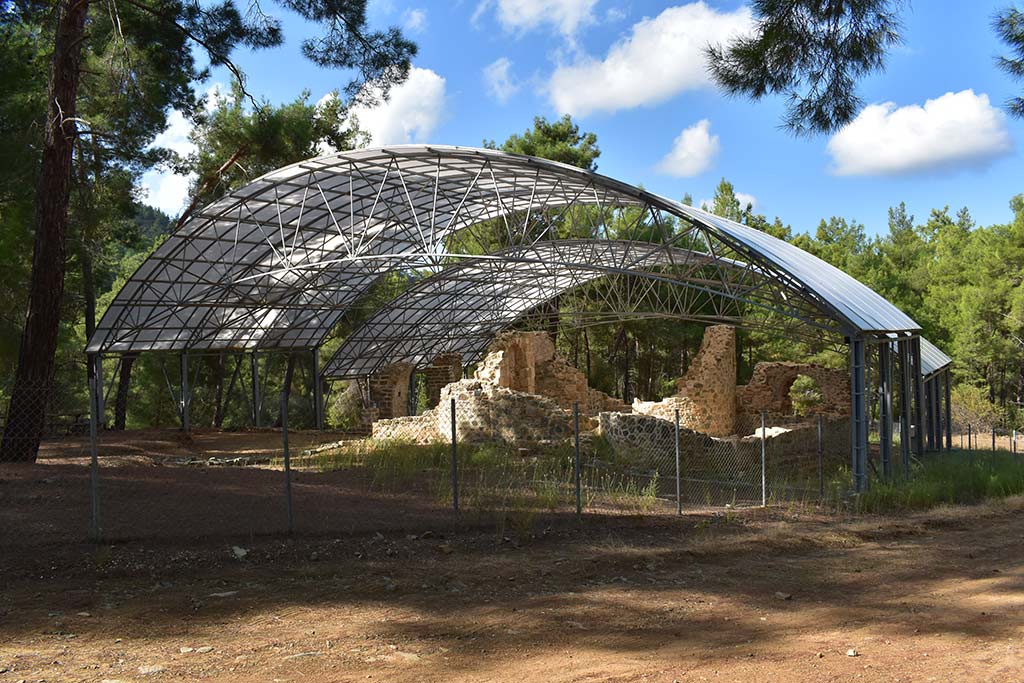 To get to the monastery you have to take the coast road from Polis, drive to Gialia, and follow the signs. We include a map at the end of the blog, just to show the exact route, but it isn't that complicated. The route itself is very beautiful, and will form part of a later road trip, once I have worked out the full itinery.

Once you get to the monastery, the first thing you will notice is that they have protected it by adding this roof. This also means that it is nicely shaded should you visit during the summer heat. Or November heat, for that matter... 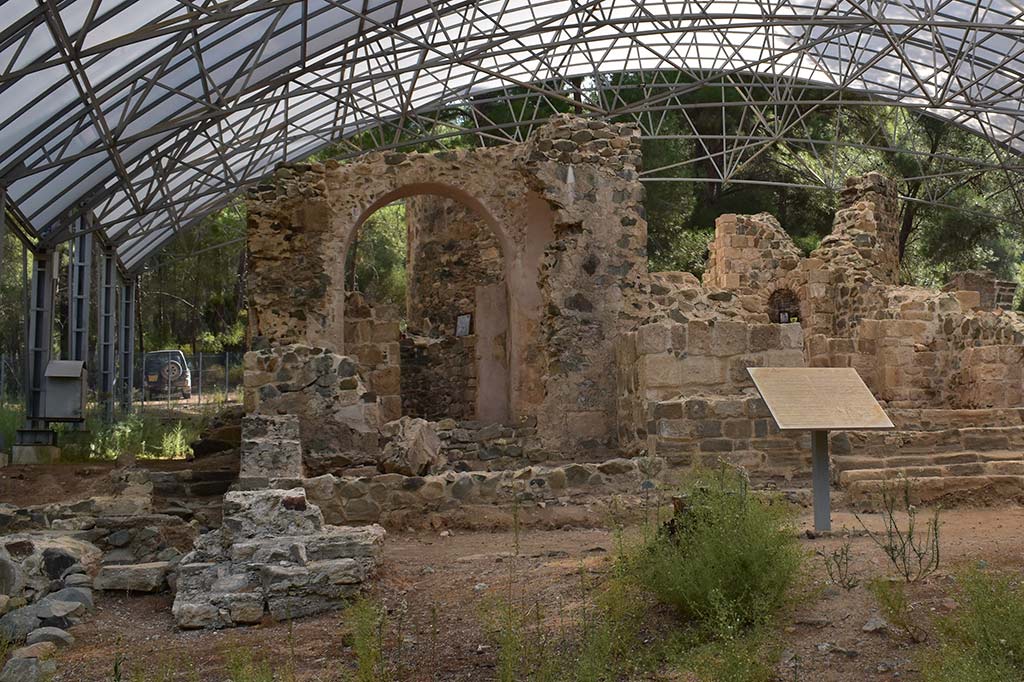 There is a notice board at the front (or should that be back?) of the monastery. I shall reproduce what it says here, over the next few posts. If the text is italic, it came from the notice board.

The Gialia Holy Mother Georgian Monastery, was founded between 970 and 979 by David Kuropalates, King of Tao Kiarjeti, in what was then southwest Georgia - today an area of northwest Turkey. The Georgian kings, David Agmashenebeli (1089 - 1125) and Tamar (1184 - 1210) took special care of the gialia Monastery, which also became a significant centre fro Georgian culture in Cyprus when it was founded. A strong educational centre was at the heart of the monastery, where books were transcribed and translated, and are found today in book collections all over the world. According to written sources, the Gialia Monastery was one of the richest Cypriot monasteries, with an annual income of 300 ducats.

So this is old. 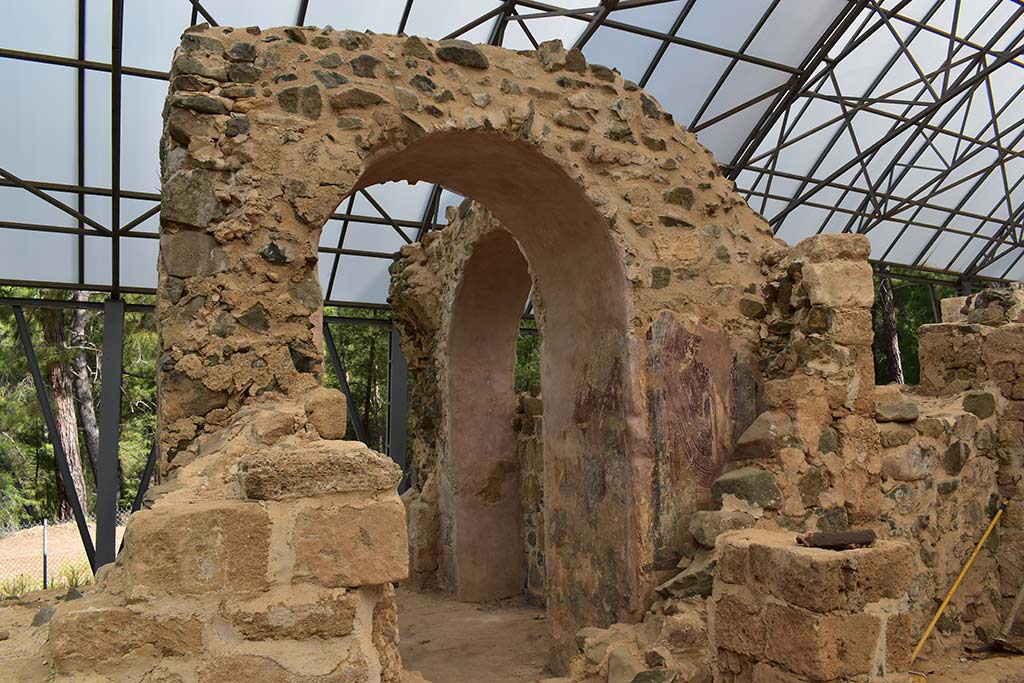 We shall tackle the monastery from left to right. This archway leads to the first passage. You can see signs of ancient artwork.

It should be pointed out right from the outset that this is a reconstruction, built from the rubble that was originally found here. If you think that is cheating, look at the history of Stone Henge.

The ruins of the Gialia monastery had been overgrown with earth and weeds until 1981, when it was identified by a famous US-based Georgian scholar, Vakhtang Jabadze. In 2006 -2010 an archaeological expedition organized by the Ministry of Culture and Monument Protection of Georgia excavated and studied the Gialia Monastery Complex, the St Nicholas Church with the graveard for monks, the cell of a hermit monk and the monastery's mill. The main temple of the monastery is a tri-conch domed church, the only of its kind in Cyprus, but there are many such churches in Georgia and especially in Tao-Klarjeti. 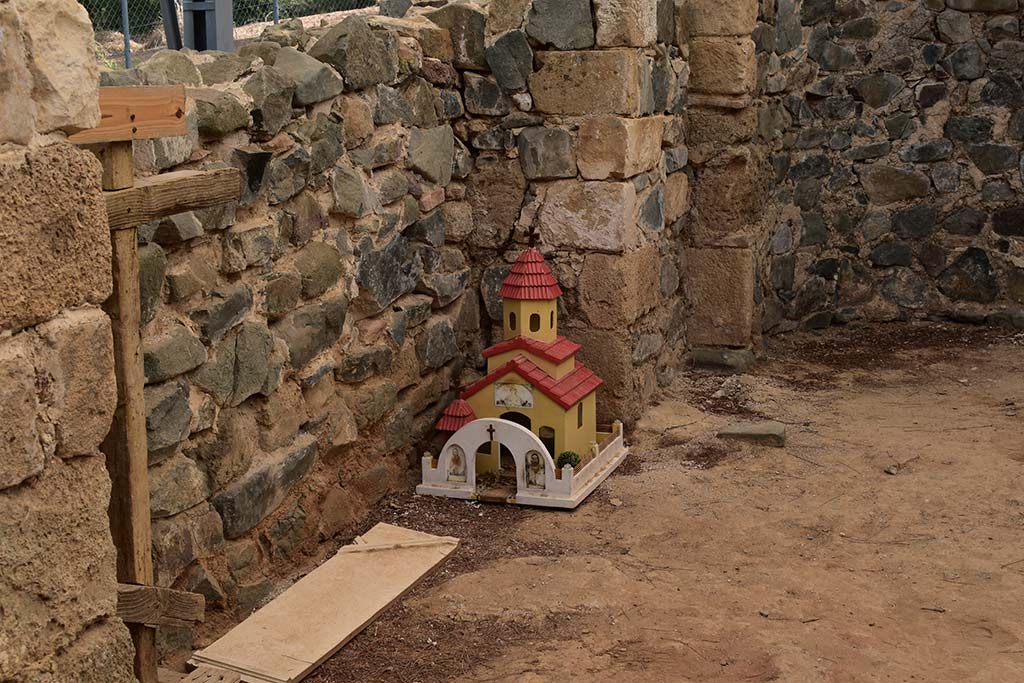 Apparently all the walls were covered with paint at one point. It must have been quite a sight.

As you would expect, the ruins have also become adorned with more modern votive offerings, and this rather natty shrine. I am not sure what the wooden construction is next to it.

The church interior is entirely painted, with scenes of the Baptism of Christ in the south apse and the Descent from the Cross in the north apse. There are semi-figures of holy fathers at the altar; fragments of painted iconostases were found in the ruins of the church. The main layer of the monastery wasll painting is an example of the highly creative painting style of the pre-Renaissance Komnenian Epoch (12th century). 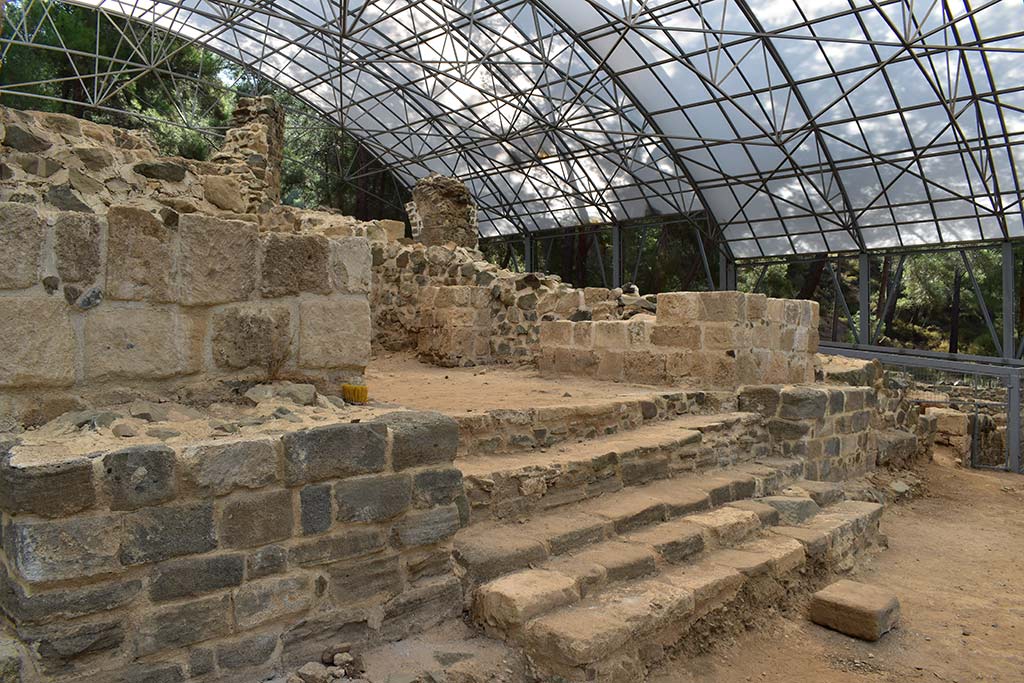 That was the extent of the first section of the monastery, so I retraced my steps and started up the central corridor.

The St George hall chapel was built in the 11th century, to the north of Gialia Holy Mother Church. A fresco inscription with an appeal to St George was identified inside the chapel, and there is a fresco of the warrior St George at the chapel door. A two-storey bell tower with a gate on the lower floor was built soon afterwards west of the St George chapel. 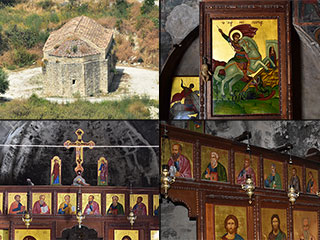 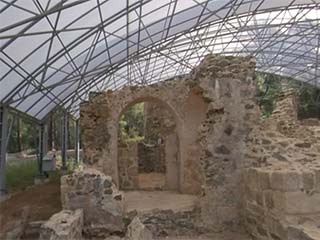 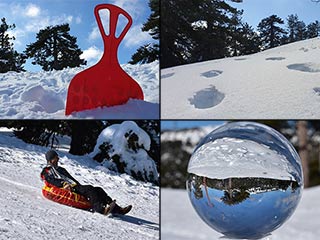 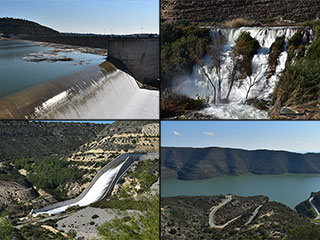 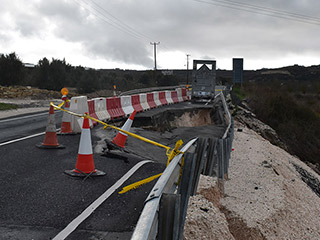 B7 Closed For Repairs

The B7 has collapsed again, just outside Giolou. It will be closed for a couple of months, and diversions are in place. We thought it would be prudent to show you what you can expect... 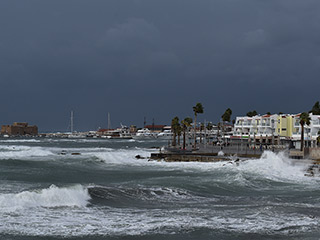 We had hoped to have some Epiphany Day Celebration photos to show you today. Unfortunately, the wind cooked up a storm and the celebrations had to be cancelled for safety reasons, though they did have a scaled-down version at the port. When life throws you lemons, make lemonade, we say. So we took some pictures of the wind to show you instead...

Experts are expected on the island next week to help solve the problem of managing the refuse-derived fuel (RDF) produced by the Pentakomo waste treatment plant which is currently being buried as no buyer has stepped in.

The road to Olympos has been closed due to heavy traffic, police announced on Sunday.

Meanwhile sleet on the Limassol to Paphos highway means it is slippery and dangerous.

Also, the road from Prodromos to Troodos is only open to cars with four-wheel drive or snow chains.

The roads from Platres and Karvounas to Troodos are open but are slippery.

The bad weather has taken a toll on the road network in the Paphos district, while cultivations bordering on the Xeros and Diarizos rivers have also sustained damage, Paphos district officer Mary Lambrou told the Cyprus News Agency on Friday.

She said that affected farmers should contact the agriculture department of the ministry and agricultural insurance organisation.

Disaster was averted last week after the Sovereign Base Area Police and its partners from within the Republic of Cyprus managed to divert the overflowing Kouris river away from the nearby desalination plant, potentially saving lives and averting an environmental issue.