Two shelters, converted from an old schoolhouse and a forestry shelter, will be open to long-distance hikers in the Paphos forest. The article also mentions upgrades to trails near Stavros tis Psokas, and other plans that are part of the "deputy tourism ministry’s national strategic tourism plan 2030 and the “Heartlands of Legends” campaign".

The Heartland of Legends website seems to be on a new path for Cyprus tourism, as their "Heartland Activities" are Hiking, Picnic, Geology, Cycling, Climbing, Birdwatching. I've really noticed this new path even since visits in 2019 and 2020. Cyprus really should be known for all those categories because so much is so easily accessible.
Top

Unfortunately most visitors aren't interested. My favourite articles and films always involve the outdoors, yet they are much less popular than those that feature Paphos and the surrounding villages.

This is why I think the good people of Inia are kidding themselves if they think they can fill ten-odd new hotels there with tourists.
Web Designer / Developer. Currently working on Paphos Life.
Living in Polemi, Cyprus with my wife and daughter.
Top

There is supposed to be a long distance footpath, part of the European Footpaths, the E4. Try following it. Even the bits where I have local knowledge, eg from the airport to Epskopi, would be almost impossible for a tourist coming out of the airport to negotiate. Google E4 maps, Cyprus and you get a map from the tourist board which shows the E4 as a pale green line, that is almost impossible to follow. Signage of the path is poor. There is 1 sign at the end of the old airport road, then, as far as I know none. I found a couple of signs in Episkopi and on the Episkopi, Ezousa trail. The path goes through the Akamas but again is almost impossible to follow on the map.
Top

I have seen a solitary signpost to the E4 just outside Kili, off the road from Kili to Tsada. This signpost leads to a broad track through vineyards which is quite scenic winding down the edge of the hill looking toward Stroumbi. Eventually this comes out on the main road just outside Stroumbi. Near the petrol station. But, as John said its unclear just where the E4 goes between the area near the airport and before it climbs the hills towards Kili.

Be interesting to see how the E4 will cross the new Paphos Polis road. Wonder if they will build a footbridge, like they did in the UK for the Pennine Way crossing the M62

Anarita John wrote: ↑Fri Jan 20, 2023 12:14 am Be interesting to see how the E4 will cross the new Paphos Polis road. Wonder if they will build a footbridge, like they did in the UK for the Pennine Way crossing the M62

John, It looks like the E4 is just missing the new motorway as this map shows... 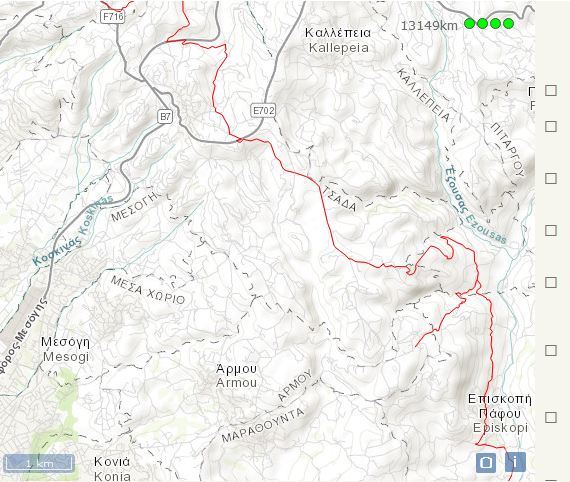 The new motorway goes under the Tsada-Kallepeia road just before the Minthis Hills Junction. The E4 runs from Aphrodites Brewery through Minthis Hills Golf Course, and crosses the motorway when it is in the tunnel.

There will be a blog article later today showing pictures of the progress, assuming I don't get too distracted.
Web Designer / Developer. Currently working on Paphos Life.
Living in Polemi, Cyprus with my wife and daughter.
Top
Post Reply
7 posts • Page 1 of 1